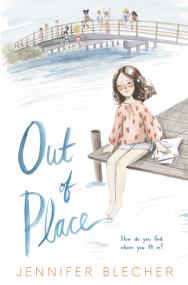 Like many, I was eagerly awaiting Blecher’s debut novel, and I am glad that we were rewarded for our patience with a stunningly complex work that can be enjoyed by middle grade readers and beyond.

First let’s dive into the setting, which I found extremely unique. Most of this book’s chapters take place in beautiful Martha’s Vineyard. I note this because the author takes such incredible care to make Martha’s Vineyard a tangible, fully realized community that you will feel that like our young protagonist cover, you have lived there all your life. I love novels that create a world that feels itself like a living breathing character, unfortunately this is found much more in YA and adult literature, but the compelling setting of this debut reinforces its already strong narrative.

At its core this is a book about perseverance, and finding happiness and self-acceptance where you already are. When Cove’s best friend moves to New York City, Cove is left at the mercy (or lack thereof) of a middle school bullying campaign. Instead of standing her ground Cove tries to depart for the supposedly more welcoming confines of New York City before a major setback forces Cove to confront not only her bullies, family, and friends but herself.

Not your usual anti-bullying narrative this middle grade page turner features a complex and flawed protagonist experiencing a profound arc of self-discovery and acceptance in a journey that shows her happiness might not be that far from home after all.