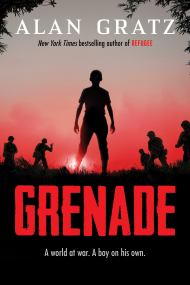 Wars seem to be absolutely inevitable these days. 30 years in 2020 have grown up in counties across the globe who’s militaries have been fighting one another at home or across seas since they were in elementary school. There is nothing shocking about it anymore, we are for lack of better words, desensitized to the facts. “Grenade” by esteemed historical fiction author Alan Gratz takes us back to 1945, nations where imploding as World War two rages on. Young men are being drafted into armies and shipped off to fight what they are told is “the good fight”. This is where we meet Hideki, a 14 year old schoolboy who’s family lives on the island of Okinawa. He is all set to graduate when the United States Naval ships arrive on their shores. It is then that his peaceful life with his loving family is thrust into the chaos of the war. Instead of a diploma he and his classmates are each handed two grandes and told what their purposes are for. One grande should be used to kill as many of the Americans as possible. The other, that second grande they are handed, should be used to kill themselves. With his Mother and sister sent away to mainland Japan, Hideki is separated from his father and sent off across the island to complete what is intended to be his first and final mission in the

as a member of the imperial army youth militia. Ray, is an American who had his sights set on heading to Europe and joining the fight agent Hitler and the Nazi’s. A young man himself at least the age of 18 he knows right from wrong and when he finds out that his fellow soldiers are having a hard time distinguishing the Okinawan residents from the Japanese soldiers it hits him that some of the men and children they are killing are simply pawns stuck in the middle of he and his brother in arms and the imperial Japanese army. This same thought has occurred to the younger Hideke and when he and Ray run into each other they have seen things that are capable of morally corrupting any man, woman or child. What decisions will they make?

Countless civilians pile up around them just like troops from either side. The Okinawan are stuck in the middle and have no idea what is about to come. A remarkably told story with historic details layered in to perfection. Being brave can have a million definitions and one decision in a split second can shape a persons bravery for years to come.

“A bone-chilling tale not to be ignored.” — Kirkus Reviews