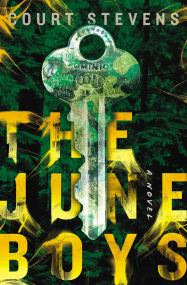 “The June Boys” By Courtney Stevens is a gripping, edge of your seat thriller that combines the wittiness of television shows such as Criminal Minds and the dark personal attachment the fictional character Alex Cross encounters in the wonderfully marvelous James Patterson novels. It all started on June 1st 2001 when three boys where kidnapped and vanished without a trace. That is until about thirteen months later when on June 30th 2002 the boys were released seemingly unharmed. The boys reported being watched and observed by their abductor but also fed and not physically injured. The stolen boys have no clue to the identity of the man or woman it was that took them as he or she wore a full faced welders mask every time they appeared. This individual became known as the “welder” but also more importantly as the “Gemini Thief”. Over a span of about a decade authorities believe that the Gemini Thief is responsible or the abduction of 12 boys. Our thief has yet to leave any clues behind making them a professional and baffling authorities. When high school senior Thea Delacroix’s cousin Aulus go missing she believes he is the thirteenth victim of the serial kidnapper that has eluded the public for so long. The police seem to have another theory, Aulus you see, just ran away, without leaving a trace or a note behind. After the body of one of the boys most recently taken is found dead,Thea decides she’s not going to sit idly by and wait to find out if her beloved cousin will be next. Why change motive now? Has our criminal mastermind finally cracked? Will he or she or they slip up and reveal themselves? With so many questions surrounding the case, Thea and her group of best friends and boyfriend turned detective squad start to question not only everything, but everyone around them, including Thea’s own Father. After unraveling quite a bit of untruths her Father has been living he becomes her number one suspect. Could it be? Could her own Father have been the Gemini Thief this entire time? The miraculous twists and turns of this novel will take on a journey you’re not soon to forget. Who is the Gemini Thief? Why June? Why watch and observe? Does Thea have the key to all of this? This quick and easy read will answer all those questions for you. That is, if you’re ready for it.

“I was hooked and couldn’t stop reading.” – Catherine Hook